One Animal We Would NOT Farm Without

Posted on August 5, 2014 by SaltSpringSprout

I love the chickens, I love the ducks even more, the geese are cool, the goats are necessary, the sheep are perfect but there’s one animal we wouldn’t do any of it without: a livestock guardian dog (LGD).

When we first had chickens, and lived in town, we built Ft. Knox to house them. In the books, I read how many predators chickens have. Everything wants to eat chicken! So we dug deep and buried our fencing. On the hen-house we attached 1/2″ wire because weasels can fit through the 1″ kind. No where did we use chicken wire because raccoons can tear right through it. All our latches were too difficult for a three-year old to open as this is the recommended test to keep raccoons out. Then we electrified a string of wire along the top of fence.

Later, I was reading permaculture articles about raising chickens and found a fantastic breakdown on the best way to raise them. It’s by Paul Wheaton and can be found here. It seems like he has tried everything and I love all the factors he’s considered. Vegetation, bugs, poop cleaning, poop hygiene, work, natural habitat, confinement, food cost. Then, near the end of his article, I read this: “But for now, let me just leave it at: if you have acreage, a livestock guardian breed of dog is the way to go. Everything becomes much easier and cheaper.” This really caught my attention, however, I did feel a little deflated at finding out that there was a much easier way to raise chickens. We had just spent roughly $1,300 on getting set up to keep the ones we had.

A year after reading this, when we found ourselves starting over on a small acreage, I told my husband that I wanted a LGD. He said as long as it wasn’t one of those giant white fluffy ones he was ok with it.

Some of you have read the story of Roman, our first LGD. If you haven’t, you can find it here.  I’ve had quite a few dogs so far in my life but I had never had one like Roman. There were many things that set him apart but his instincts were what fascinated me the most. He would position himself beside us or the goats in such a way that he could see all the avenues of approach that someone or something could take.  He wouldn’t let our Great Dane even look at his food but the chickens could eat all they wanted.  At 6 months old he ran off two dogs out of our yard.

When we lost him we discussed the purchase of another LGD. I was worried about the cost.  My husband asked, what would it cost to replace all of our animals?  He said that Roman was the heart of our farm. He pointed out how devastated we’d be at losing animals to predators.  Would we really have the desire to replace our livestock or would we end up giving up on the whole thing?

Three nights after losing Roman, something came after the ducks and we were awakened by their frantic noises. Two nights after that, we brought Bersa home.

It has been over a year now and Bersa has been wonderful. She did need some guidance at first. She chased chickens a little and she did catch one, injured her shoulder and then buried her alive. I found her before she suffocated but I had to put her down because of her injuries. It was upsetting at first but we knew that most of these dogs have an adjustment period. They almost all make mistakes and need training. It is not until they are 2 years old or so that they really hit their stride. We were able to catch Bersa in the act a couple of times in the beginning and after that she was almost perfect. She only made a few mistakes after that by giving in to some chasing.  I don’t think she made any more mistakes after she was a year and a half old.

Bersa is two now and I don’t know what we’d do without her. Here’s a recent picture: 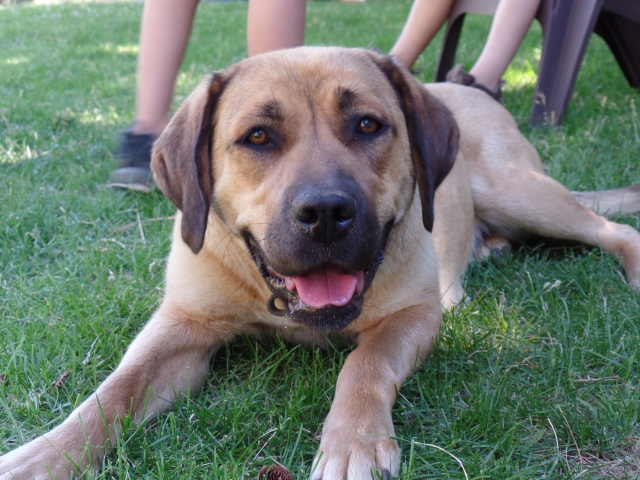 She’s a Kangal/Boerboel. If you are curious, you can read about them here.

When Roman died, we had no protection for our animals at all. We decided back then that we’d like to have two dogs. That way, if we lost one, our animals wouldn’t be in danger until we could find a replacement.

On July 5th we purchased another dog from Andrew Johnston. Here’s Hugo at 7 weeks old on the car ride home: 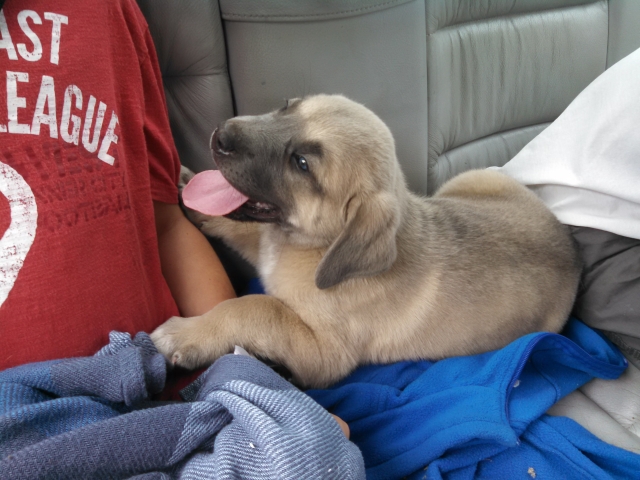 Bersa and Hugo hit it off right away. She had absolutely no problems accepting him. I actually think she spoils him a little. I’ve never heard her snap or growl at him to put him in his place at all. He can get away with anything. He chews on her face and she just playfully knocks him over. 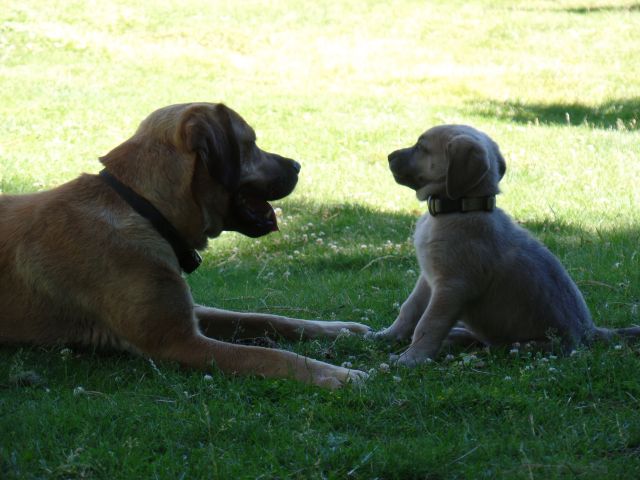 It’s been really neat to see Bersa look out for Hugo, too. Our tomcat, Walter, was very upset at the arrival of Hugo. Walter stays away from him now but in the beginning, when Walter would puff up and hiss and get ready to strike Hugo, Bersa would come and run Walter off. Now, you need to know, Bersa and Walter are the best of friends. But Bersa will not stand for any violence. I’m pretty sure she picks up the cues from us. When Daniel’s sister was visiting with her 5 pound lap dog, Hugo was after her little dog so much that Daniel finally told him to leave it. After that, every time he’d go after her Bersa would run interference.

Our neighbors are surprised that we have never lost any animals to predators. We have everything out here, from coyotes to cougars. There are raccoon tracks all around our property but nothing ventures inside where Bersa roams.  The only animals that have gone missing were some ducks when they were swimming in the river.  Unfortunately for them, Bersa doesn’t swim and they were picked off by the bald eagles.  She did do her best by barking from shore, though.  Poor duckies.

We also really appreciate our LGD’s style of protection. Some use barking as a constant warning to keep other animals away. I’ve often heard of Great Pyrenees that bark all night. I never would have thought to look up what style the different breeds use to ward off predators so I’m really glad we didn’t end up with a kind like that.

You have probably also noticed that although Bersa has a job on the farm we do treat her like a pet. You may have read that you shouldn’t allow your LGD to become too attached to you, that it will interfere with their bond with the livestock. We struggled a lot with this when we first got Roman. We read different opinions until we finally realized that our property is small enough for our dog to be able to do it all. Yes, our dogs hang out around the house but they can smell and hear everything that’s going on. I’ve seen Bersa patrol as well. She marks territory and keeps watch a great deal of the time. She also did really well when we locked her up with our three goats while she was in heat.  Within a week she had made a new friend so I don’t think her contact with us interfered at all with her ability to bond with stock. 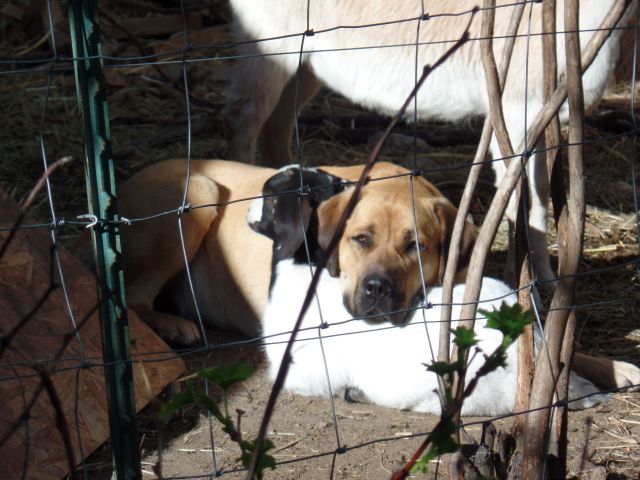 Something that might surprise you is that Roman, Bersa and Hugo are all mixed breed dogs. Personally, I love a good mutt. I think they benefit from the mix of genetics and often overcome a lot of the negative effects that inbreeding has on the purebreds.  One argument I’ve heard, though, is that you never know what you are getting. The difference with our dogs is that they were bred on purpose by someone who has a great deal of experience. You can read about Andrew Johnston’s dogs on his website olympicdogs.net.

While not all of you may have an Andrew Johnston nearby, I would highly recommend that you find out who is in your area that breeds LGDs. Find someone who is sensitive to the needs of people with livestock. You won’t go wrong with a person with a good reputation. If they are selling you a dog that is supposed to be good with animals and children and it isn’t then they’ll do whatever they can to make it right. They should also provide you with excellent health guarantees as well.

We are so impressed with these types of dogs that not only would we never farm without one, we never want to live without one either.

10 Responses to One Animal We Would NOT Farm Without